Opposite Day Has Begun-Right Wingers Now Defending Refusal To Deploy

Man, this story has me cracking up but good. I'll probably be laughing all weekend.

For those on the sidelines, for a long time, a large part of the conservative sector has been loudly and vociferously protesting anyone who didn't want to deploy because they thought the war was wrong. From conscientious objectors to people who believed we should never have been there in the first place, there was pretty clear rhetoric: if you don't want to deploy, you're a traitor who's bringing the Army down. Any attempt to portray these evil, evil people as heroes was loudly decried as crazy talk.

Enter Major Stefan Cook. Major Cook says he refuses to deploy because his orders to war are illegal. He, however, doesn't challenge the legality of the entire war, just President Obama's piece. If he can't see President Obama's birth certificate, he won't deploy.

You would expect, if the right wing were internally consistent, to see condemnation on all sides. After all, this guy is depriving his fellow soldiers of a body/his experience!! He must just be a coward! Maybe a traitor! He is after all trying to get military folks all over to do the same!

To give the man his due, my frenemy(now legal in the OED, booyah) TSO, has attempted to be internally consistent and has condemned the man, and his crazy lawyer.

Let's have a look at what the right-wingers had to say, shall we? Normally I might not clip comments, but given that IVAW facebook conversations have become fair blogfodder, here goes: 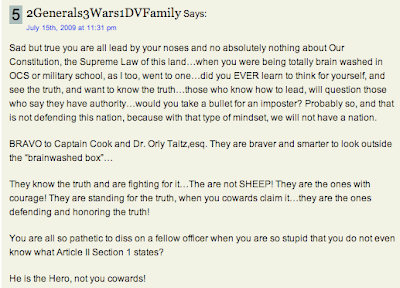 And once again, this is different from the soldiers that refused to deploy took court martials so that they could put the war on trial....how?

Either way, I am sitting back with a can of pop and watching this hilarity unfold.

Now what I do think is kind of screwed up is that for this Major, rather than punish him, they simply canceled his deployment orders. So the way it seems to go is...if you're an enlisted soldier who refuses to deploy, you go to jail. If you're an officer, you must be taking a principled stand and so you shouldn't have to go.

For Those Who Would Judge Me

Those who have been following Iraq Veterans Against the War for a while are probably well aware of Displaced Films-the incredibly awesome documentarians who are producing the official Winter Soldier documentary, showing not only testimony, but what happened to get the testimony there-the story-behind-the-story, if you will.

What some of you may not know is that with the sudden recession, the production of the movie was slowed somewhat. Displaced Films needs to raise the capital to put this out in a serious way, so if you're a potential donor, you should definitely head over and help out. But if you're not familiar, you might be curious as to what it's all about, and why exactly you should support this enterprise.

I could tell you that David Zeiger, producer of Sir, No Sir, is the mastermind behind this enterprise, but that won't help you nearly as much as taking a look.

The following is the first webisode of many this summer designed to promote the feature length film.
Watch-and learn what Winter Soldier was all about.

For Those Who Would Judge Me from Displaced Films on Vimeo.

Edited to add: Thanks to Jonn Lilyea of TAH for helping to correct my embed code so the video would properly display. I know he probably hates the content, so it's even more awesome of him to help out.
Posted by Army Sergeant at 8:51 PM 21 comments: