IVAW members wishing to follow the latest controversy regarding the Board and the current situation should look on the member forum at http://ivaw.org , where two posts in the Open Forum give much more detail.

Thank you, and I appreciate all of your support in this trying time.
Posted by Army Sergeant at 10:01 AM No comments:

At the Will of the Board of Directors

I hereby retract the previous post that I removed as directed.
Posted by Army Sergeant at 1:01 PM 38 comments:

With all due credit to Adam Kokesh.

When I was ordered by the Board of Directors to remove my previous blogpost and publicly and officially apologize to Jose Vasquez, Aaron Glantz, Haymarket Books, and Camilo Mejia, I wasn't quite sure what to do.

Then I remembered: I had a precedent to follow! A leader of IVAW was once in this situation. Just as he has taken the model of Jabbar Magruder's principled status as a disciplinarian to his heart, so too do I take his model example of how a Director should apologize.

I apologize for publicly criticizing your behavior and offending you while representing the IVAW Board. It was sloppy messaging, and I have learned my lesson; fortunately the Board of Directors has made it clear that it was not an official IVAW statement. I remain forever committed to the organization of IVAW, its ideals, and my fellow members, brothers and sisters in the struggle.

On a lighter note, I have decided to get an IVAW tattoo on my left upper arm to mirror the Gate of Ishtar tattoo on the right. (See attached photo below.)


It reads:
and back again

I have an idea for what the IVAW tattoo would say that would be an expression of the philosophical ideals of IVAW, but I am open to suggestions. It should be approximately the same number of words or letters per line, and ideally in the same tempo. If anyone comes up with something better than what I have, I'll use it and put your name underneath. Just kidding. But you will at least get credit for it on my blog ( activedutypatriot.blogspot.com) and my eternal gratitude.

I hope to continue to move IVAW forward in an organized and unified manner, and look forward to crafting policy that protects the rights of members and maintains the maneuverability of chapters necessary to achieve our objectives. 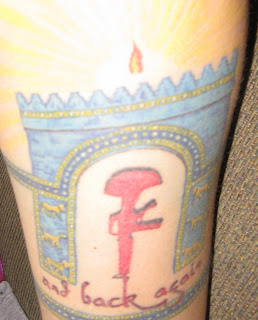 Resignation as Secretary of the Board of Directors [Edited]

Removed by order of a majority of the Board of Directors of IVAW.


The Star Chamber Lives!
Posted by Army Sergeant at 8:49 AM 22 comments:

Newsflash: If You Support Anti-Iraq War Organizing, that means me, too

I got an email in my inbox today that made me think I needed to write one for the peace movement as well. In response to my comment that I didn't believe in class war, and talking about how I didn't believe soldiers were interested in it either, I received:

What you have before you, Selena, is a typical GI Resistance publication, Vietnam-era style. Many such publications were the work of civilians who were working alongside GIs, which is the case of GI Special. Tom Barton works with members of VFP, IVAW, VVAW, etc and they reprint articles from papers like the Army Times, and from web sites such as our very own.

Your opinion of this publication is a reflection of just how out of touch you are with the organization you're in. Have you ever checked out Vets For Freedom? They loooove the constitution, they're flag waving patriots, and they want troops to reenlist. I bet they would have a similar opinion to yours about GI Special.

I'm not going to waste too much on this, Selena, but I really think you should explore other organizations that would better meet your desire to be a hard core patriot. IVAW is really not that place.

If you believe in supporting IVAW, in supporting the soldiers of conscience, those who want to organize against the war, then you need to support me, too.

I love America. I love my brothers-in-arms, even if it is in a dysfunctional way. I love the Constitution, and the founding fathers. I have a slightly unhealthy obsession with Alexander Hamilton. I believe in a system of democracy. I believe in our freedoms. I may think some things in our country aren't working perfectly, but I do not believe in changing them with any particular 'ism' of the moment. If you have an agenda? I'm against it. If you are attempting to use what I believe in for your own purposes? Feel free to consider me your implacable enemy. I am not your soldier. I swore an oath, and I meant it.

Some of those in the peace movement like to call me names because of these beliefs. They like to call me "jingoistic" or "nationalist". A "reformist apologetic". One prominent activist tells me that because I don't believe in "class war" I need to get out of "their" movement.

Well, here's a newsflash for anyone who may not have been paying attention at home. I don't believe in socialism, and never will. What I feel about it is best summed up in the following quote:

"I am opposed to Socialism because of its inhumanity; because it saps the vitality of the human race which has no vitality to spare; because it lulls to indolence those who must struggle to survive; because the theories of good men who are enthralled by its delusions are made the excuse of the wicked who would rather plunder than work; because it stops enterprise, promotes laziness, exalts inefficiency, inspires hatred, checks production, assures waste and instills into the souls of the unfortunate and the weak hopes impossible of fruition whose inevitable blasting will add to the bitterness of their lot." -Edward Adams

You'd better get used to that, folks. If you want to organize with me? Be aware. I will not support your hidden agendas. Your hidden agendas are poison to me. Have the courage of your own convictions, and keep to your own organization for it.

Then I'm sorry for you, but you need to recognize you're just as much of a hypocrite as the people you claim to be organizing against.
Posted by Army Sergeant at 12:46 PM 11 comments:

I will warn to anyone reading this post that I'm currently operating in a white-hot frothing rage. I will also point out for new readers that as a domestic violence survivor and personal assault survivor, my biases are probably almost definitely in play.

That careful diplomatic statement said, allow me to say,

What happened to that whole "We're protecting women's rights in Afghanistan" thing?

The Guardian has the story: "Worse than the Taliban? New Law Rolls Back Rights for Afghan Women"

Marital rape legalized, unless you have a "good excuse, like being sick or something"?
FUCK THAT.
You want to hear a good 'excuse'? It's called "I don't want to have sex with you". That's all the 'excuse' anyone should need. It's called consent. Marrying someone doesn't give it up. Nothing can give it up. That's the biggest violation I can possibly imagine. And yes, I have a personal stake in this, because that's what my command said to me the first time I went to them for help [Editor's note: not my current command], that you can't get abused like that by your husband.

And this is the Afghan government we support? The one we say is going to be the savior of human rights and women's rights? What the fuck have we accomplished? I understand not intervening in other governments and interrupting sovereignity, but this is OUR PUPPET GOVERNMENT! I mean, I don't support sock puppet governments, but if we're going to have one, if we're going to prop up Karzai on his tottering political legs, can we at least get some use out of his yes-man status to avoid crap like this? This is so vile, so utterly vile, I can't even comment on it civilly at the moment. Maybe later I'll work up something reasonable and rational for Military Pundits, I'm not going to rant quite this much at 1SG Grisham's "house". But can anyone view this without anger? Seriously?
Posted by Army Sergeant at 6:40 AM 7 comments: